Well, I'm doing a Bargue drawing a day - trying to train my eye - I'll give it four months to a year as a daily discipline (if it seems to start paying off). I set up the Bargue plate (A3 photocopy) on my (big) drawing board - with a sheet of smooth paper next to it. My first problem is I'm not sure how many reference axes and points to use - I think I'll stick to 1 central vertical axis and four points (top, bottom and left and right limits of the model) - but this seems to conflict somewhat with Bargue's constructs - it seems to me? The finished drawings take between 1 to 3 hours (I try do be as accurate as possible, but don't want to bog down in spending huge amounts of time on them - and they look pretty nice! - but the 'shading' in the originals is something to behold. I 'eyeball' to get my my line and then check with dividers (I erase it if it's incorrect). I'll see if this trains my eye - it sure teaches you patience - and that with care you can do some good stuff....
Posted by JonInFrance at 9:16 PM 2 comments: 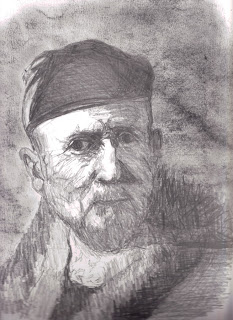 After a Rembrandt self-portrait (in colour)


"The value of graphite was soon realised to be enormous, mainly because it could be used to line the moulds for cannonballs, and the mines were taken over by the Crown and guarded. When sufficient stocks of graphite had been accumulated, the mines were flooded to prevent theft until more was required. Graphite had to be smuggled out for use in pencils. Because graphite is soft, it requires some form of case. Graphite sticks were at first wrapped in string or in sheepskin for stability. The news of the usefulness of these early pencils spread far and wide, attracting the attention of artists all over the known world". - From the excellent Wikpedia article on "Pencil".

We call it a pencil lead - but it's graphite = totally non toxic and a lubricant! - no wonder if flows

Like I said, over the last two years, a number of artists' comments on the foundational  importance of drawing have stuck in my mind (often along the lines of "painting IS drawing") - and following Stapleton Kearn's observation that most people in his workshops had drawing problems, except for those who had done some sort of cast drawing., I've decided to spend a year on drawing. The good news is I've got right into it - the idea of shades of grey has gripped my imagination and will probably give me some "conceptual ideas" - but my basic premise is : YOU CAN TRAIN YOUR EYE. The two basic things - other than the exciting possibilites of the various drawing meda available - dynamic/flowing lines and etc. etc. is to limit meself to proportion and value - the two basics of a good representational image.
Posted by JonInFrance at 11:21 AM No comments:

You would think, that as far as "eye training" goes, someone would put out a computerized equivalent of the Bargue drawing course for use with an electronic tablette e.g. Wacom - your drawn line would be color coded to show the type of error (length wrong = blue, angle incorrect = red) and you could try again until you got it right (as long as the computer didn't make that horrible "refusal" beep noise - I guess it would be classical music for "cast" drawings!!!) - it would be so much faster than erasing on paper. You could have a value scale on every page too. Oh well, just a thought

Addition - I'm an idiot - its easy to set it up in a good vector drawing program - and I have! - even on paper there's ways to achieve this
Posted by JonInFrance at 6:01 PM No comments:

This is great, at last I feel like drawing and am enjoying it - I'm "copying" the Bargue plates. Paul Foxton's blog, "Learning to see" is great - I've always followed it, but found his last couple of posts particularly inspiring. I'm going to try to train my eye. I'm doing my best to do accurate drawings (measure) - but just consider them as exercises, not finished works.

"You can only paint as well as you can draw"
Posted by JonInFrance at 8:56 PM No comments:

Yep, following Stapleton Kearn's comment that the people in his workshops have, above all, drawing problems (and Richard Schmid said the same thing), unless they had done some 'cast' drawing, I'm busy drawing  - there's a number of approaches - or usually some combination thereof:

measuring (using a rod or dividers, etc.) (either absolute, relative or based on a unit (e.g. the head))
sight-size - often combined with a measuring technique and a centerline (plumbline)
triangulation
geometric forms
bounding envelope

That's some of the approaches to establish placement on the surface and the general proportions - which are checked/found using plumblines/lines of alignment - after that on to the quality of the line, the details, and drawing per se. "Drawing is not for the impatient" - that's my problem

From Wikipedia: Among the artists whose work is based on the study of Bargue's platework, is Vincent van Gogh who copied the complete set in 1880/1881, and (at least a part of it) again in 1890
Posted by JonInFrance at 9:41 PM No comments:

All these little coincidences

Here's one of them - Matt Innes had an ‘Identify the painting’ competition over on his blog, ‘Underpaintings’ – one of the paintings really spoke to my heart – probably by Bastien Lepage, I thought. 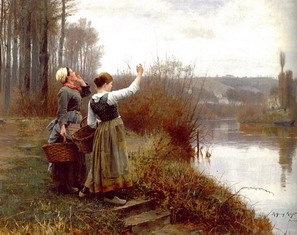 When he gave out the answers, the artist turned out to be an artist I’d never heard of, Daniel Ridgway Knight, and the painting’s title “Hailing the ferry”
– as I looked him up/checked him out (interesting) I found he was an American who lived and worked in . One of the major reasons his painting appealed to me was the river in it – it reminded me of my rambles all over the area north of Paris – and especially of the hotel perched on an escarpment overlooking the river (Seine) where Sylviane and Thierry had their wedding party – I thought it was such a great place http://www.domainedelacorniche.com/ - then I read that this village – Rolleboise- was the village he lived and worked in! Such strange little coincidences – serendipity – these threads crossing….
Posted by JonInFrance at 8:40 AM No comments: